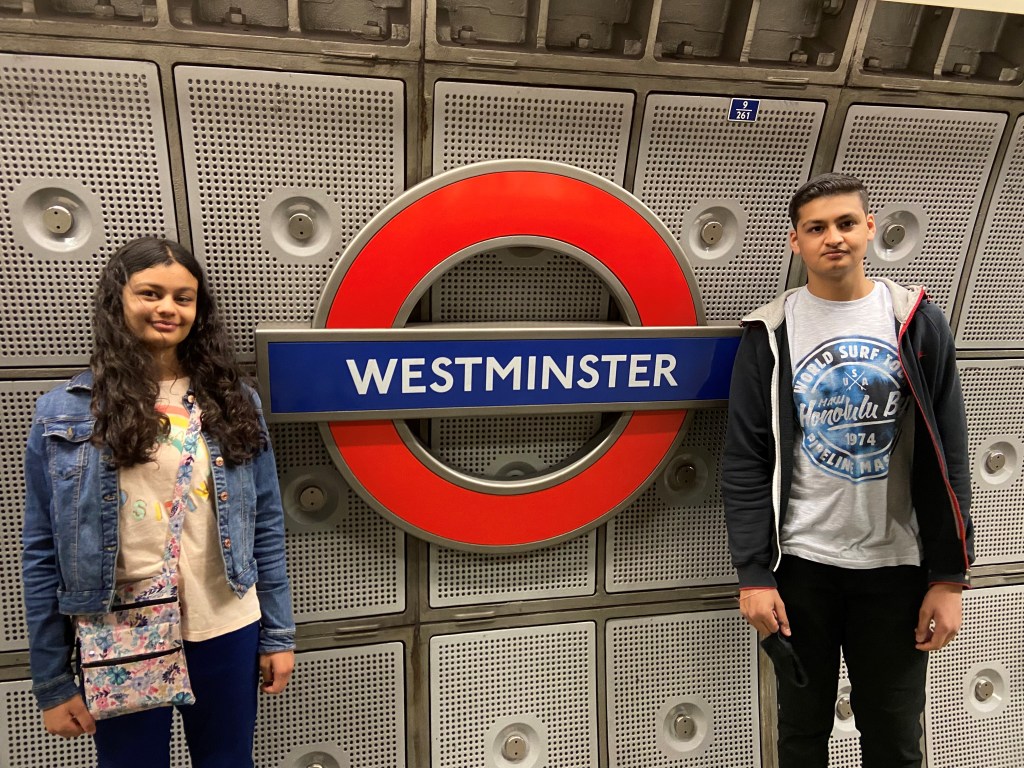 Senior School siblings, Arun (Y10) and Priya (Y7) were special guests at a personal tour of the Houses of Parliament.

Their invite came from local MP Wendy Morton, to thank the children for their virtual violin concerts they gave to care home residents during the COVID pandemic.

Arun and Priya said they had the best day ever! They had an amazing tour and got to find out more about how Parliament is run. They had written the following personal accounts of their visit:

The Palace of Westminster is the place in which the House of Commons and the House of Lords is. It is commonly known as the Houses of Parliament.

It is situated on the North bank of the River Thames, in the city of Westminster.

In person, the House of Commons is a lot smaller in person than on TV by a large extent. This therefore explains why you can see some politicians standing up on TV. Sometimes there can be up to 650 people in the room.

I felt very privileged to have stood where Boris Johnson and where Sir Kier Starmer stand. Overall, I found it an exhilarating and interesting experience.

I was invited to visit Parliament with my brother Arun because we played violin concerts to lots of care homes in lockdown as well as to our local MP Wendy Morton.  She enjoyed listening to our playing so she invited us.

We were searched by security before were allowed to enter Westminster Hall.  We saw many old paintings and statues, some of which are being renovated.

I saw paintings of the wives of Henry VIII, which I recognised from my History class.

The best part was being in the House of Commons and standing at the Dispatch Box, where Boris Johnson and Sir Kier Starmer stand.

We also went into the House of Lords and saw the Queens Throne, which is amazing, full of gold and even though it is not always used, it is cleaned every day. There is a Lion at the back on the wall with its tongue sticking out!

Did you know there is a post office in the Central Lobby of the Palace of Westminster and each MP has a named tiny pigeon hole for any post – even though they usually use emails to communicate.

It was an amazing and interesting experience, one which I will never forget.